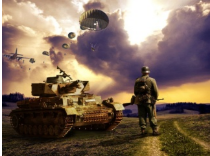 About Bell: The root in many English words “Bell” came from Latin word “Bellum” Which means “War”. The meanings of the words derived from this root literally don’t possess “Warlike” situation. But they have some common traits like “Hostility”, “Oppose”, “Absence of concord” etc. Words: Bellicose (adjective) - Warlike. Belligerent (adjective) - Hostile, ready to fight. Belligerence (noun) - The quality of being hostile, ready to start a fight, or ready to go to war. Rebel (adjective) - Person who opposes and fights. Rebellion (noun) - An act of armed resistance to an established government or leader. Antebellum (adjective) - Occurring or existing before a particular war. Postbellum (adjective) - Occurring or existing after a war. Bellicism (noun) - War-mindedness. Bellicosity (noun) - Characterized by being in favor of or inclined to start quarrels or wars. Bellipotent (adjective) – Mighty in war.