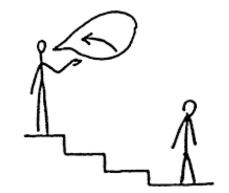 About: The root word ”Ven” used in many English words, is derived from Latin word “Venire” which means “Come”. The words derived from this root will always possess its root sense, whether literally or figuratively. Words: Convene (verb): Come or bring together for a meeting or activity; assemble. Venue (noun): The place where something happens, especially an organized event such as a concert, conference, or sports competition. Convenient (adjective): Fitting in well with a person's needs, activities, and plans. Revenue (noun): Income, especially when of an organization and of a substantial nature. Intervene (verb): Take part in something so as to prevent or alter a result or course of events. Event (noun): A thing that happens or takes place, especially one of importance. Prevent (verb): Keep (something) from happening. Invention (noun): The action of inventing something, typically a process or device. Inventor (noun): A person who invented a particular process or device or who invents things as an occupation. Adventure (noun): An unusual and exciting or daring experience. Convention (noun): A way in which something is usually done.