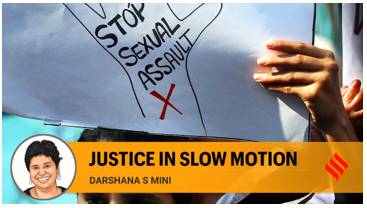 In April 2021, SAG-AFTRA, the union of entertainment industry professionals in the US, standardised its procedures for filing sexual harassment claims in the entertainment sector through a digital platform called “Safe Place”, that would locate patterns in the complaints and prevent repeat offenders from going unchecked. While the #MeToo movement in the US has led to some positive actions, such as the creation of the Hollywood Commission headed by Anita Hill to safeguard the rights of the complainants without fear of retaliation, the response to the movement has been tepid — even hostile — in many other industries, including South Korea and India.

Take, for example, the 2017 assault against an actor in Kerala, which continues to rock the state. The assault and the ensuing events — which resulted in the survivor recently making her identity public and seeking the chief minister’s intervention to ensure justice — are a blatant exhibition of male privilege and show a disregard for the professional and personal dignity of women who work in the industry. In other instances, we have seen brief apology statements; but a majority of the allegations have been countered by defamation suits — a silencing strategy seen with filmmaker Leena Manimekalai and journalist Priya Ramani. Most telling is the sheer apathy with which even the Association of Malayalam Movie Artists (AMMA) responded to the 2017 assault, which was allegedly masterminded by another actor. While both actors remained part of the organisation, the survivor received little support.

The formation of the Women in Cinema Collective in 2017 was a result of such institutional silences that allow sexual harassment, wage inequity and lack of safe working spaces to prevail. Right from its inception, there have been concerted efforts to delegitimise the WCC as an exclusive space built through a nexus of class privilege. While it is true that there is room for improvement in the WCC’s larger coalition-building efforts, especially with women’s collectives outside cinema, social scientists such as J Devika have noted how there are “common threads of patriarchy that run through our (separate) struggles.” This patriarchal hegemony can be observed in how the WCC’s actions are monitored and held to higher standards than organisations such as AMMA or the Film Employees Federation of Kerala (FEFKA). Even media platforms are guilty of perpetuating such gendered expectations. Take the WCC’s press conference in 2018, when members who were addressing the media were met with a barrage of questions, demanding that they reveal the names of harassers, as if only the declaration of names could legitimise their claims. One wonders if the journalists would have addressed an AMMA meeting the same way. Not long after the formation of the WCC, as part of its Silver Jubilee celebrations, AMMA staged a “comic” skit that disparagingly portrayed a thinly-veiled reference to the WCC through the fictional organization “WhatsApp Women Empowerment Group”. Among its many offensive strategies was the inclusion of a character who was shown to be negotiating an abusive marriage—a tactical move to delegitimise the political awareness that led to the constitution of WCC in the first place. Such diversionary strategies came across as part of a hypermasculine tradition of labelling women as “emotional,” “lacking real skill in organising” and as a “bunch of feminists” pushing their personal agendas.

When one considers the focus of the WCC, it’s not hard to see why such responses emerge. The WCC demands accountability from film organisations and seeks the constitution of an internal complaints committee (ICC) as per the Sexual Harassment of Women at Workplace (Prevention, Prohibition and Redressal) Act, 2013. While this is yet to materialise in Malayalam cinema, one wishes that the Film Chamber of Commerce (FCC), FEFKA and AMMA would proactively institute a complaints redressal mechanism that does not alienate the complainant. While the functioning within workspaces needs to be addressed using the mechanism of the ICC, it is equally crucial to ensure that cyberattacks on women actors are also dealt with strongly, as fan groups are ready to rally behind male stars, no matter their offences.

The recurrent demands from the film fraternity to release the Justice Hema Commission report speaks volumes about the way reports of constitutional bodies end up in the attics of bureaucracy. In 2017, the Kerala state government constituted a three-member commission headed by the retired High Court Justice K Hema, to explore “options for improving women’s safety, security, a better salary, service conditions and creation of a conducive working environment.” Despite the submission of the report to the government in December 2019, it has not become a public document yet. While one can understand why the Commission might not want to make the entire contents of the report public, particularly to guard the confidentiality of the respondents, one wonders if an amended version redacting the concerned portions is not within the scope of legal and ethical possibilities. The material collected by the Commission is crucial for policy-level actions pertaining to gender equity in the film sector. Not making its core findings and recommendations public restricts meaningful engagement with the issues highlighted by the Commission and makes a mockery of the labour, emotion and time invested by those who have testified. What we require are not just judicial commissions, but tangible possibilities of implementing corrective measures to ameliorate the conditions of women who work or want to enter the industry. Alongside infrastructural support and financial resources, work conditions have to be inclusive enough for any long-term change. While the state government’s decision to constitute a cinema regulatory authority for resolving labour disputes is certainly a welcome move, only careful deliberation can tell us whether it will have the desired impact. Since we do not have any comprehensive data set on issues related to gender, wage, and labour rights in the film industry (except the survey that the WCC has initiated), the time is ripe for considering the inputs of cine-workers. Perhaps, a survey on the labour conditions of cine-workers could showcase how apprenticeship and unpaid labour is normalised in the system as one way of going forward. And at every step, we must remember that it is never a question of either labour or gender, but about labour and gender. Intersectional thinking is key, if we want to see lasting change in this industry, and perhaps we would all be well served to remember Audre Lorde’s dictum, “There is no such thing as a single-issue struggle because we do not live single-issue lives.”