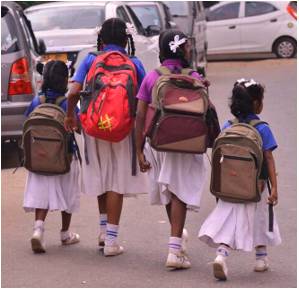 If schools revert to business as usual, India has to be prepared to confront a disaster in educational outcomes.

Since school closure has led to a great loss of nutrition and schooling for the poorest sections of our society, there is some urgency in the calls we hear to reopen schools. However, the important question remains this: if schools were to reopen tomorrow, are we prepared for their resumption? Will it be merely business as usual?

In what has been perhaps an educational disruption in history without parallel since the mass education system took root in India, schools have been closed for 16 months now, with no clarity on or a timeline for their resumption as yet. The country has promoted online classes and e-connectivity as the solution, perhaps inevitably so, since physical contact between teachers and children has not been possible. The focus has been on secondary and higher secondary education, with most States ensuring some form or other of online classes for this segment. However, due to a lack of connectivity as well as a lack of access to e-devices, only a fraction of children even in this age group has had online education of any kind. When it comes to children in the primary and upper primary classes, even such access has been limited to a minuscule fraction. Children of the poor, studying in government schools, have been especially disadvantaged in this regard.

Further aggravating the situation is the quality of online education — it is largely abysmal. As most studies show, the percentage of teachers in the country capable of handling digital platforms for pedagogic purposes is very small. The educational material provided by them has also been mere reproduction of what is used in a physical classroom. Hence, even where online classes have taken place regularly — as in the case of urban schools, with students largely from middle and high income groups — the teaching-learning processes have by and large been poor.

As has been well documented by now, all this has resulted in what commentators have termed nutrition loss and learning loss. Worldwide, many studies in the last year have documented a loss of learning in children. In the Netherlands, despite a short lockdown, equitable school funding, and excellent broadband access, researchers found that among eight to 11 year olds, “students made little or no progress while learning from home” and that “learning loss was most pronounced among students from disadvantaged homes” (https://bit.ly/3hORC5N). A large multi-State study in the United States records that the pandemic “has also prompted some students to leave the public school system altogether”.

According to a study by the Azim Premji Foundation in January 2021, covering more than 16,000 children in the age group six to 11 years, and across five States, 92% of children on average have lost at least one specific language ability from the previous year across all classes; the figure is 82% when it comes to mathematical ability.

A question that looms large in the minds of teachers, parents and especially the children, is a basic one: will a child, who was in Class four in March 2020, and did not get to attend a single class during the academic year 2020-2021, be admitted into Class six now in (say) August 2021? In areas where this means admission to a different school, is this automatic? In some States this has already been addressed and answered this year. Age-appropriate enrolment, as guaranteed under the Right to Education Act, is being uniformly implemented. But this has not been ensured across India, with many States not taking up enrolment for this year as yet.

Even assuming that enrolment is not an issue, if we return to the child in the illustration above, as the child enrols into Class six, will she start with Class five textbooks, or Class six textbooks, or some new “bridge” material?

This is, of course, a decision to be taken by the State government, but what is the rationale to be used? And what are the implications?

‘One way of addressing the learning crisis might be to repeat the entire academic year. The government in Kenya has decided to do just this’. Some countries, such as the Philippines, allow extended time for classes on resumption, both in duration of school hours and more calendar days of interaction. ‘Another approach is to reduce and synthesize the curriculum so that students are able to focus on a few subjects and learn them well’. This is followed, for instance, by the State of Ontario in Canada.

One-to-one tutoring for the most disadvantaged learners has been taken up in many countries. Among the most prestigious such programmes is the National Tutoring Programme in the United Kingdom for which the government has announced funding to the tune of £350 million. Ghana has also announced a national programme of tutoring. There are several such programmes in different States in the U.S. In Italy, university students are volunteering to conduct one-one-one classes for middle school children from poor immigrant backgrounds.

Accelerated education programmes or “bridge courses”, which condense several months (or even years of schooling) into a few weeks or months, are another option. This concept has been taken up in several countries.

One strong voice emerging from all these experiences is: “Acceleration, not remediation”. The advice is to go with exposure to age-level grade-level content, and plug the holes where necessary. Many educators warn against a deficit model that starts with measuring “loss” and tries to “fill the void”, before returning to the “normal”. Such models tend to ignore the complexity of psychological preparedness in children, and reduce learning to a single dimension of achievement, which invariably works against children in low-resource contexts.

Some have even asserted that “... there is no such thing as learning loss”, and that students have learned a great deal about life, home economy, health and much else during the pandemic that cannot be measured by standardised tests; that learning should begin with acknowledging this and building on such informal learning.

In the words of Tony Cotton, a renowned mathematics educator from the U.K., “The curriculum should not be seen as a fixed list of content that must all be covered before the learner can leave school. If the curriculum can be seen as a map, as a landscape, there is always plenty of time to explore.”

Given the state of preparedness of our education system, and based on what we have seen during the last year, it is hard to see our schools taking up a curriculum based on where the children are, in terms of what they have learnt from life during the novel coronavirus pandemic. The most likely event is that schools will simply revert to business as usual, with a reduced syllabus, and no change whatsoever in the overall curriculum or pedagogy, and racing through the syllabus to “catch up”. Children who cannot keep up would simply be left behind. This would be a great disaster. It is very likely that children from the poorest sections will be the ones who are affected the most, by having to race in accelerated learning programmes with no support at home. Teachers, without preparation for handling such a new context, can only fall back on covering the syllabus, leading to the alienation of already marginalised students.

What we need now is nothing less than a national rejuvenation programme for elementary education. The school system cannot do what is needed by itself. We need a vast body of volunteers engaging in small groups with children from the most disadvantaged sections, working in tandem with schools, which will need to focus on safety measures and average performance. It is critical that we should not reduce education to foundational literacy and numeracy, but treat children as they are, study the experiences they bring, and address their nutritional, emotional and intellectual well-being as a whole. This requires a flexible curriculum rooted in local reality, working with physical material, and pedagogy based on sound principles of psychology of learning.

The country has already shown during the pandemic that it lacks the capability to re-imagine examinations, whether it be at the secondary school level, or at university. Now, with the education of small children, a similar lack of imagination in curriculum and pedagogy will be splendidly ironic: without ourselves learning any lesson from the pandemic, we would be demanding that the children learn their lessons.