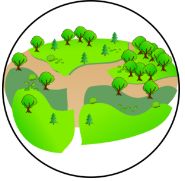 About EXO: The root in various English words “ENDO” Taken from the Greek Language Which means “Outside”. This root generally used as a prefix in English words, and has opposite traits of “ENDO” root words. Words: Exotic (adjective) - Originating in or characteristic of a distant foreign country. Exoteric (adjective) - Intended for or likely to be understood by the general public. Exothermal (adjective) - Of or relating to a chemical reaction during which heat is released. External (adjective) - Belonging to or forming the outer surface or structure of something. Exocrine (adjective) - Relating to or denoting glands which secrete their products through ducts opening on to an epithelium rather than directly into the blood. Exoskeleton (noun) - A rigid external covering for the body in some invertebrate animals, especially arthropods. Exobiology (noun) - The branch of science that deals with the possibility and likely nature of life on other planets or in space. Exocellular (adjective) - That occurs outside of a cell. Exocentric (adjective) - Denoting or being a construction which has no explicit head.