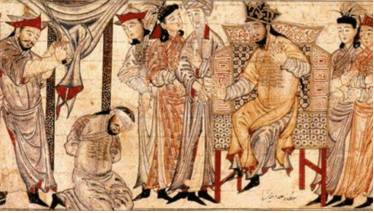 When Sanskrit-speaking elites were not well-treated, Muslim kings were decried as mlecchas, accused of killing cows and persecuting Brahmins.

The 12th century was a period of great tumult in northern India. With the emergence of new sultanates in Afghanistan, connections between Central Asia and the Indo-Gangetic Plain were rejuvenated. Turkic ideas of rulership and royal costume were adopted by Shaivite and Buddhist rulers through Kashmir and Ladakh. Rulers such as Mahmud of Ghazni employed Indian troops and allowed temples in their territory to flourish. Even Muhammad Ghori, depicted through the most absurd stereotypes in Bollywood today, issued coins marked with the goddess Lakshmi.

However, literary sources from the era have made it all too easy to paint the period as one of ‘Islamic bigotry’ versus ‘Hindu resistance’. This is an oversimplification, but an understandable one. After all, as much as the sultans tried to present themselves as Indian rulers in India, they also commissioned over-the-top narratives of conquest and destruction of “infidels”, meant for orthodox audiences in West Asia. But what was happening in India at the time? How did India’s ruling elites see the irruption of these new rivals? How did they present their warmongering, and who were their audiences? The answer shows us, once again, that the reality of history is far stranger than anything we can imagine.

Sometime in the late 12th century, an embassy from Ghor, led by the sultan’s chief vizier, arrived at the court of the Chahamana king Prithiviraja III (better known to us as Prithviraj Chauhan). Historian Finbarr Barry Flood, in Objects of Translation, discusses how a Ghorid text, the Taj al-Ma’athir, claims: “The envoy… conveyed the message of the king to the raja in a refined and graceful manner. He strung the pearls of counsel and admonition in the threads of fine phraseology.” However, the Prithiviraja-Vijaya, a Sanskrit text produced by Prithiviraja’s court, is much ruder. “His head was so bald and his forehead so broad it was as if God had intentionally made them thus to inscribe [as on a copper plate] the vast number of cows he had slain. The colour of his beard, his eyebrows, his very lashes was yellower than grapes that grow in his native land… Horrible was his speech, like the cry of wild birds… all his phonemes were impure, impure as his complexion. He had what looked like skin disease, so ghastly white he was.”

The Prithiviraja-Vijaya was a mahakavya or epic poem, dating 1192 CE when conflict between the Ghorids and the Chauhans was at its peak. These epics were commissioned by Indian courts for consumption by other elite audiences. They are the perfect counterpart to the conquest narratives commissioned by Afghan sultans, which were also intended for elite audiences. Unsurprisingly, such texts go out of their way to describe the ruler’s political rivals as cowardly, ugly, unethical, and grotesque, so as to justify their eventual defeat and contrast them with the ruler’s positive qualities. In that sense, they are quite similar to modern Tollywood, Kollywood, and Bollywood epics, which use the same technique to make the audiences sympathise with the hero. As empirical sources, mahakavyas are not much more reliable than movies.

A more sobering view of the expanding power of the sultans comes from the Etawah Fort Inscription (Sanskrit Inscriptions of the Delhi Sultanate, pages 92–93). In 1193 CE, the inscription tells us, an unnamed priest of the Gahadavala king Ajayasimha performed a great sacrifice to the goddess Durga. This was soon after Prithiviraja Chahamana had been defeated at the Second Battle of Tarain, and Kannauj had been conquered by the sultan. The priest interred a statue of Durga to be recovered at a later date. “My rationality has been destroyed because of my fear of the mlecchas [casteless barbarians],” he wrote. “With great sorrow, touching her with my head, I place this Durga, dweller of the fort and destroyer of bad luck, into this pit, till the god Skanda turns the mlecchas’ glory into dust. When ill fate meets the yavanas [foreigners] she might reappear, or manifest herself again amidst uproar!” Inscriptions such as these are reminders of the violence that accompanied such conquests and the terror that elites could feel about the destruction of their socio-political and religious institutions by a new regime.

It would appear that just as the sultans claimed to their orthodox audiences that they were enemies of the Hindu gods, the Hindu ruling elite also saw them as fundamentally inimical to their religion. Or did they?

The sultan as the ‘protector of the gods’

In 1276 CE, around 80 years after the Gahadavala priest buried an idol of Durga out of terror of the sultans, another Brahmin, Yogishvara of Delhi, made an inscription that said: “The land of Hariyanaka was first enjoyed by the Tomaras and then by the Chauhanas. It is now enjoyed by the Shaka kings… He, the central gem in the pearl necklace of the seven-sea-girt earth, Nayaka Sri Hammira [Emir] Gayasadina [Ghiyas-ud-din Balban], the king and the emperor, reigns supreme… The earth being now supported by his sovereign, Shesha [the serpent], altogether forsaking his duty of supporting the weight of the globe, has betaken himself to the great bed of Vishnu; and Vishnu himself, for the sake of protection, taking Lakshmi on his breast, and relinquishing all worries, sleeps in the ocean of milk.”

In this inscription, the sultan is depicted as such a righteous and capable ruler that the god Vishnu himself may rest in peace. (Sanskrit Inscriptions of the Delhi Sultanate, pages 12–15). And about 100 years after the Prithiviraja-Vijaya, by 1290 CE, the Chauhans—apparently indefatigable enemies of the Ghoris—had not only accepted royal robes and sent golden statues of tribute but even named one of their rulers Hammira (Emir) whose brother was Suratrana (Sultan). In fact, a slightly later text, the Hammira-Mahakavya, praises the power of Alauddin Khilji and describes Hammira’s last stand by the side of one Mahimashahi, a Muslim. How are we to resolve these contradictory depictions?

In his Representing the Other? Sanskrit Sources and the Muslims, Brajadulal Chattopadhyaya provides an explanation. Simply put, when Muslim kings adhered to the elite social order — respecting Brahmins and temple endowments, recruiting members of the upper castes — Sanskrit sources praise them in terms similar to those used for any medieval Indian king. When they were treated with honour and granted wealth, Indian elites had few issues working with Muslims; Turks, Persians, and Afghans were simply accepted into an already-cosmopolitan ruling class and worked with Indian elites to extract resources and wealth from other political rivals. When Sanskrit-speaking elites were not well-treated—especially in times of expansion and war—Muslim kings were decried as mlecchas, accused of destroying the social order, killing cows and persecuting Brahmins, and so on. This is by no means nationalism or bigotry, simply a politics of pragmatism and convenience very similar to our own.

When we look at medieval sources with our modern biases, it’s important to ask: Could the history we were taught produce the evidence we see? We are taught a history of near-constant religious enmity, persecution, and resistance. And yet, all the evidence—from art history to numismatics to literature—actually points to a much more complex medieval world. Just like ours, it was full of self-serving elites who had no qualms about lying to make themselves look better. Just like ours, it was possible for people to inhabit many identities and many ways of presenting themselves to different audiences —from “Srimad” Muhammad Ghori to Maharaja Hammiradeva.