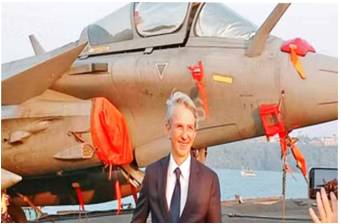 French envoy Emmanuel Lenin said France was willing to partner on critical projects. It comes at a time when New Delhi is trying to reduce its military dependence on Moscow.

On board Charles De Gaulle: Asserting that France is a ‘great option’ for India to diversify its defence supplies amid a heavy dependence on Russia, French Ambassador to New Delhi Emmanuel Lenin said it's willing to partner with India on critical projects including possible nuclear-powered submarines.

On board the French nuclear-powered aircraft carrier Charles De Gaulle, the French envoy also committed to jointly developing a fighter jet engine together.

‘We have great cooperation on strategic issues. There is an extreme level of trust for the countries to commit to each other,’ he said responding to a query by The Print. ‘No other country can commit to delivering the best technology to the Indian forces without any kind of restrictions. We are committed not just to Make in India but also step further and co-develop and co-manufacture with India.’

He was responding to a question on whether France was willing to help India ‘diversify’ from its dependence on Russia when it comes to defence equipment.

‘India is looking to diversify its suppliers and obviously France is a great option. So, yes,’ he said.

He pointed out that France has successfully delivered 36 Rafael fighter jets and other systems to India and wants to develop a national-level defence industrial base in India.

Asked if France will help India in developing nuclear-powered and nuclear attack submarines just like the Russians, he underlined that the country has a longstanding submarine cooperation with India.

‘The Naval Group has been working with the Mazagaon Dock Limited and building in India the Scorpene submarines while fully transferring the technology,’ he said. ‘We want to continue with our partnership. Whether India wants to go in for P751 or more Scorpenes or even next generation, it is up to India to make up its mind.’

Lenin pointed out that with Australia, the French had offered a new conventional diesel and electric submarine based on its Barracuda class of nuclear-powered submarine.

The French envoy said that the level of cooperation that exists between India and France requires trust and commitment for 10 to 30 years.

France had always stood by India, he said, even when other countries like the US had slapped sanctions on New Delhi over the nuclear tests.

He was referring to the nuclear tests that India conducted in Pokhran in 1998.

Ties between India and France date back several decades. The last few years have seen a renewed push for deeper bilateral ties, especially in the defence sector.

The growing relationship between the two countries has led to the view from a certain quarters that France has replaced Russia as India's new best friend.

Sources in India's defence and security establishment also argue that as New Delhi seeks to move away from its dependence on Russia, it will also keep the interests of Russia — which has for long been the biggest partner for India in the latter's strategic programme in mind.

According to a 2020 study by the Stimson Center, 85 per cent of the Indian armed forces work with Russian equipment.