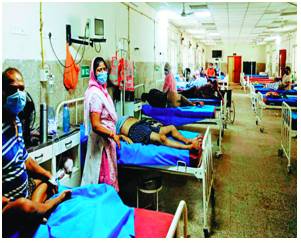 All segments of our population, percolating down from the politicians, have done grave injustice to our great nation. Even the citizenry has!

As a nation, COVID-19 has put us all to a severe stress test and extracted a heavy toll. However, our collective conduct and response to it was unsatisfactory. This is a once-in-a-century health crisis. Ironically, it is being fought at a political level, at common man’s expense. The irresponsible, motor-mouth media coverage and open hostility to logic and reasoning are quite astonishing.

First came the question — Why the lockdown? Then politics on migrant sufferings ensued; followed by vaccine hesitancy created by a few parochial politicians. Later, it was “why vaccine diplomacy”? The Government felt it had prevailed over COVID-19 better than any other country. Alas, the triumph was short-lived. The pandemic chose not to follow the eloquent graphs and, instead, spread like wildfire at the second instance — engulfing the country with ruthless speed.

Consequently, the health system collapsed with patient overload. The country felt humiliated by falling flat on its face and now gasping for breath. The critics quickly got their mojo back and floored the Government on several counts of alleged mismanagement. Amid this spectacle, media and the political class chipped away the national spine.

Showcasing bruises rather than the breakthroughs achieved, the Opposition and media offered their own narrow politics and collective depravity. They gravely compounded the confusion and trauma of the common man with their insensitive utterances and reporting, with lasting consequences. But are only politicians and media to be blamed? Reckless public flouting rules exacerbated it. In a country like India, it can be a recipe for disaster. It is akin to offering the pandemic vector, velocity and virulence, all at the same time. No wonder the country was on the skids in the second wave.

The mayhem on TV news channels gave the impression that States and their administrators were running like headless chickens. Common sense, sensitivity and conscience were also given a hasty burial. The motor-mouth media scavenged every ounce of this tragedy. The forensic reporting of the deaths and burials and ambulance-chasing continued regardless, assaulting and shocking the viewers’ senses. Tracking the death numbers became a competitive sport. As if arriving at a statistically correct figure would lend more credence to journalistic reporting. Instead of erring on providing a measured tone and tenor, media got busy framing the macabre. In the process, it inflicted incalculable psychological trauma and emotional scars on an entire generation.

Foreign media laid bare their fangs. They have dissed us before and their continued interest in framing narratives for India — as an inferior nation that can’t get anything right — continues with charming regularity. Misrepresenting India pays rich dividends to the western press. Their entrenched prejudices towards our country fail to meet the journalistic standards they avow to follow. They hunted for stories at the burial grounds. Invading the privacy of families, without consent, they gleefully and luridly captured drone shots of burning pyres. The western press couldn’t resist using the tantalising visuals to deck up their front pages. Even in this hour of universal human tragedy, the foreign media swooped so low; and how!

Adding to this rot are the ever-bankable, omniscient award-winning fiction writer celebrities. One wonders, what do these creatures eat and breathe to radiate such toxicity? Commenting on statecraft, health and policy decisions are perhaps the same things for them as writing fiction. One thing is clear, the western press has no appetite for any meaningful engagement with the country, its aspiration or its trials and tribulations.

Also, perplexing amidst all this was the hyper-ventilating doctors posting emotionally charged appeals on social media. Such outbursts needlessly created further panic among the common public. Maybe the intent was to spread awareness on the ruthlessness of the pandemic — but it compounded hopelessness. We can’t afford doctors, our frontline workers, to break down and be seen shaken and helpless. It sends a jarring message. Imagine a soldier at our borders broadcasting to the world all the hardships he is suffering on duty, would that be acceptable to us?

Umpteen “experts” and talking heads added chaos and cacophony more than comfort. The pandemic communication protocols are weak and need to be strengthened. A pool of well-trained medical professional who can articulate and provide consistent messaging in the most reassuring manner should form the backbone of any pandemic communications scenario in future. It’s time medical education emphasises on teaching and “patient communications” as key soft skills and management subject area. Doctors require training on how to deliver critical health information to public and elicit trust and confidence among it. Most practising doctors seem to be incapable of drawing upon this vital skill.

Finally, a citizenry with no individual responsibility and expecting everything to be done by the Government is sheer delinquency. An irresponsible and devil-may-care attitude of the citizens was visible all through the pandemic. Nothing will work unless we do!