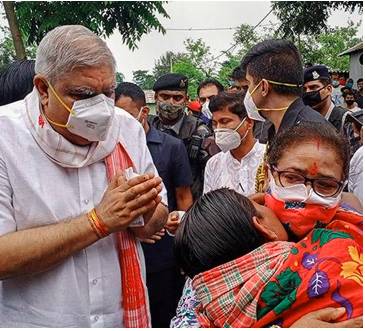 The Central government’s designs in West Bengal serve to undermine the structure of federalism.

The results of the bitterly contested West Bengal elections were declared in early May. It has been more than a month since the Trinamool Congress won with a massive mandate, but the Bharatiya Janata Party (BJP) and the Central government still seem unable to get over the BJP’s loss in the State. The BJP has tried every tactic in the book to put the Mamata Banerjee government under pressure, including resurrecting corruption charges against four leaders (three from the Trinamool and one who was formerly with the party), and serving a show-cause notice to the now-retired Chief Secretary of West Bengal. The State Governor has played a partisan role both before and after the election. The Centre’s actions could be seen at one level as cynical politicking at a time when all its energy should be focused on mitigating the impact of COVID-19. At another level, these designs serve to undermine the structure of federalism and democracy.

Let’s look at the events — of the recent arrests and the show-cause notice, and the Governor’s role. The latter is an issue with historical antecedents and is not unique to West Bengal or the current BJP government.

On May 17, the Central Bureau of Investigation (CBI) arrested three Trinamool leaders, including two State Ministers, in connection with the Narada sting operation, carried out in 2014, showing top Trinamool leaders allegedly taking bribes. The footage had surfaced before the 2016 West Bengal Assembly elections. In 2017, the CBI and the Enforcement Directorate launched investigations into the scam. It is the timing of the arrests now that has raised suspicion, as did the sanction for prosecution given by West Bengal Governor Jagdeep Dhankhar to the CBI just days after the election result. Moreover, the CBI’s failure to proceed against former Trinamool leaders Suvendu Adhikari and Mukul Roy, both of whom are accused in the case but have defected to the BJP, has justifiably provoked allegations of political vendetta and bias on the CBI’s part.

A bureaucrat in controversy

The second event that has caused friction between the Trinamool government and the Centre is the controversy over the former Chief Secretary of West Bengal, Alapan Bandyopadhyay. Mr. Bandyopadhyay was scheduled to retire on May 31 but had been given a three-month extension by the Centre on the State government’s request. However, days before his original retirement date, he was unexpectedly asked to report to the Department of Personnel and Training in New Delhi on May 31. This order came hours after Ms. Banerjee skipped a review meeting on Cyclone Yaas with Prime Minister Narendra Modi at the Kalaikunda air base in West Bengal. While the rules allow the recall of IAS officers from States, the Centre usually does so with the concurrence of the State government. That was not the case here. The Trinamool government predictably refused to release him and asked for the order to be rescinded. When that did not happen, Mr. Bandyopadhyay resigned from his post. He was immediately appointed Chief Adviser to Ms. Banerjee.

While Mr. Bandyopadhyay’s resignation may have temporarily stymied the Centre, it promptly responded by serving him a show-cause notice for violation of Section 51(b) of the Disaster Management Act, 2005. According to Section 51(b), anyone refusing to comply with the directions of the Central or State government or the National Executive Committee or State Executive Committee or District Authority can be jailed or fined or both. The show-cause notice was issued because Mr. Bandyopadhyay did not stay back for the meeting on Cyclone Yaas with Mr. Modi and left with Ms. Banerjee to oversee relief work. Mr. Bandyopadhyay responded to the notice saying he was merely following the orders given to him by the West Bengal Chief Minister. While several lawyers and bureaucrats believe that the Centre’s position is untenable in a court of law, its actions once again highlight its intention to target an Opposition government at all costs.

While the recent controversies do not bode well for federalism or indeed democracy, it is the West Bengal Governor’s actions that have had the most corrosive impact. Ever since his appointment, Mr. Dhankhar has needled the State government in every possible manner. However, since the election result, he has, in the words of a political analyst, taken the place of the “political Opposition” in the State. While there is no denying that there has been post-poll violence in parts of Bengal, Mr. Dhankhar went overboard in describing the situation as “total lawlessness and anarchy”. In a breach of protocol, he even visited violence-affected areas along with the BJP’s elected representatives.

Though Mr. Dhankhar’s actions might be in keeping — in intent though not in degree — with many contemporary and past governors, they once again raise questions about the role of a governor. During the long period of Congress dominance, the governor’s position had largely been reduced to furthering the Centre’s interest in the States. While the Congress did occasionally appoint eminent personalities and technocrats as governors, such as Gopalkrishna Gandhi in West Bengal, the position by and large was reserved for superannuated politicians and party loyalists. The latter practice has continued under the Modi government.

There was a heated debate i`n the Constituent Assembly in 1949 on the role of the governor. Members such as H.V. Kamath, K.T. Shah, Rohini Kumar Chaudhuri and Bishwanath Das were critical of the powers of the governor. They viewed the position as a relic of the colonial era, one that was “capable of creating mischief”. Das, a Prime Minister of Orissa Province in colonial India and later Governor of Uttar Pradesh, was one of the most vocal critics of the position. He had presciently noted that since the governor was appointed by the Centre, it was quite likely that he or she might not be acceptable in an Opposition-ruled State, especially if the “power to give administrative pin-pricks is vested in the governor”.

B.R. Ambedkar attempted to address these misgivings by making a distinction between the “functions” and “duties” of a governor. He concluded that the governor was not a representative of a “party” but of the “people” of the State. There was arguably enough ambiguity in this formulation for a governor to be an activist and partisan, if he or she so desired. Ambedkar’s faith in the Centre and governors seems misplaced since most governors, especially in recent times, have proved to be representatives of the party that appointed them and not impartial constitutional authorities. The very fact that governors are expected to resign when there is change of government at the Centre is proof of that. Indeed, the West Bengal Governor’s actions illustrate the fears of the critics in the Constituent Assembly.

If the Centre continues with its methods of using Central agencies and the Governor to keep up the pressure on the West Bengal government, it might score political points in the short term. However, in the long run, this will weaken India’s federalism and democracy. It also paradoxically hurts the BJP’s prospects in a State where it needs to politically mobilise against a party with a big mandate and not resort to strong-arm tactics.