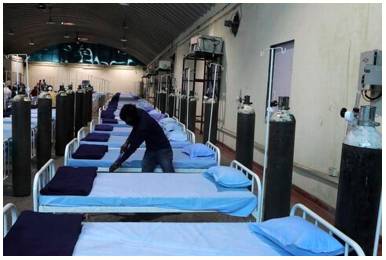 India let its guard down too early and policy hesitancy and fast-spreading virus mutants have added to the surge.

The rapid ascent of the second wave of COVID-19 in India from the third week of February, a major source of concern for the general public, the government, health administrators and the medical profession, needs to be carefully interpreted.

A careful analysis of the numbers is instructive. After having reached a nadir by the third week of January and staying there for nearly four weeks, the numbers rose by the third week of February. While the cumulative number at the peak (September 16, 2020) of the first wave was 51,15,893 (reached in six months), infections in the second wave in the last eight weeks are already 29,66,583, or 58% of the numbers at the first peak.

We can speculatively predict the timing of the second peak and the time taken to reach herd immunity threshold as follows.

Earlier, we concluded that at the end of the first wave, 60% of the population had been infected (828 million). The uninfected 40% would be 1,380 million minus 828 million = 552 million. According to a recent Indian Council of Medical Research report, the reinfection rate in India is 4.5% — out of 828 million initially infected, 37.26 million are susceptible to reinfection. The total number of susceptible subjects for the second wave would be 552 million+37.26 million = 589.26 million.

The R value of the initial ‘variant’ of the virus of the first wave was 2-3, meaning, one infected person would infect 2-3 others; the variant(s) causing the second wave has a higher R value — we guess it may have doubled, ≥ 4. The herd immunity level required to bring the numbers down to end the second wave (herd immunity threshold) would be about 75%-80%, in contrast to 60% for the first wave — in terms of actual numbers, a maximum of ~471 million (80% of 589.26 million).

Well into the second wave

We have already diagnosed 2,966,583 infections in the second wave by April 13, 2021 and the current doubling time is 10 days. Therefore, in the next few days we ought to reach ~3.1 million detected cases, spelling the peak of the second wave. We are already 56 days into the second wave; if the peak occurs within the next four days, the time from base to peak would be 56+4= 60 days. The descent after the peak will take an equal length of time — two months — in a normal bell-shaped epidemic curve. We expect steady low levels of infection (endemic state) will be reached by mid-June 2021.

Our estimates assume that the conditions will remain the same throughout the second wave, but with vaccination rates going up, curbs being re-imposed and possibly higher re-infection rates, the timing of the peak may vary by a few days and the cumulative infections detected could differ by one or two million.

By early February the fear of the pandemic waned and people lowered their guard, allowing the virus to spread unchecked; had we stayed vigilant and achieved wide vaccination coverage then, the second wave could have been smaller or even averted. Vaccine hesitancy, policy hesitancy and fast-spreading virus mutants all added to the tempo of the second wave. We let our guard down too early — a costly error.

A larger number of symptomatic infections in youngsters in the second wave may be attributable to their higher mobility and premature opening up of schools and colleges in the face of highly infectious variants.

The weekly average of new cases reported on March 23, 2021 was 42,162 and three weeks later (April 13, 2021) the average of deaths was 844 — a relatively low infection fatality rate of 2%; priority vaccination of the elderly and the vulnerable who stayed cocooned, and clear-cut management strategies for serious cases may have contributed to this.

We should insist on the golden rules of mask wearing, cough etiquette, maintaining physical distance, hand-hygiene and avoiding crowds, and pursue an aggressive vaccination drive to contain the situation without imposing a lockdown, which will hurt the recovering economy and lead to untold public misery.

Travel curbs for fully vaccinated individuals are being lifted in the United States. In India, vaccination can be made a pre-requisite for those who come in contact with large numbers of vulnerable people (for example, teachers). Vaccination at offices (started in Tamil Nadu) and persuading staff in the Indian Railways to get vaccinated quickly are innovative steps in the right direction.

Universal mask use, an important and effective preventive measure, despite proven benefits, is practised by only 50% of people in our surveys. This COVID-19 inappropriate behaviour can be addressed innovatively; anyone found without a mask in public may be given a mask and charged for it. If all public figures wear masks in all their public appearances, citizens will get a clear and effective message.

The government’s decision to give emergency use authorisation to all World Health Organization-approved COVID-19 vaccines is likely to narrow the demand-supply gap. The mRNA vaccines, which appear to offer greater protection against new variants and other vaccines in the pipeline to cover variants of concern need to be mass produced, tested and commissioned quickly to benefit everyone.