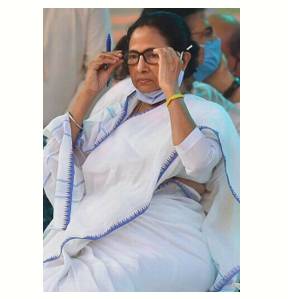 Mamata Banerjee’s assumption that Bengali nationalism could block anti-incumbency and Hindutva may be optimistic.

The Trinamool Congress (TMC) government in West Bengal is a unique specimen in understanding anti-incumbency. Welfare schemes that usually make incumbents popular have added to the anti-incumbency woes of Chief Minister Mamata Banerjee, as the workers of her party made those the easy and only option for rent-seeking. ‘Cut money’, or the cut for TMC local leaders on welfare disbursement, is the most important reason for anti-incumbency in the State. The unaccountable nature of power at the panchayat level after the 2018 elections were rigged by the ruling party, made it into an apparatus of extraction rather than a dispenser of patronage. The balance between patronage and extraction, which sustains political parties, was lost. Second, Ms. Banerjee, sought to compensate for her past alliances with the Bharatiya Janata Party (BJP), by an overuse of Muslim symbolism, which has caused a backlash among Hindus and Muslims.

Usually, smart politicians use a crisis to neutralise accumulated resentments and reinforce their popularity. In Kerala, Chief Minister Pinarayi Vijayan could turn two floods (2018 and 2019), a cyclone and the COVID-19 pandemic as opportunities to demonstrate his governance; in Assam, pandemic relief helped the BJP government quieten any public dissatisfaction and Finance Minister Himanta Biswa Sarma became the face of a caring government. In contrast, Ms. Banerjee’s wayward workers made the Amphan cyclone (2020) in the midst of the pandemic a spectacle of corruption and inefficiency. The weakness of the state in West Bengal that the CPI(M)’s organisational capacity could camouflage earlier became more pronounced under the TMC. The key strategist of the party has acknowledged that anti-incumbency is a major factor. In fact, it is the overarching theme.

Ms. Banerjee is trying to control the damage. Welfarism is an important tool in her kit — the TMC is offering a universal basic income for all families, if elected to power for a third term in West Bengal. She also realises that economic promises without emotional appeals are just not good enough. She is appealing to Bengali exceptionalism, and questioning Delhi imperialism, invoking the fear of the outsider, accompanied by a show of her Hindu anchorage.

The existence of strong anti-incumbency is not a question of debate, but its impact is. Who are the new claimants to power? Which one among them has the capacity to harness anti-incumbency in its favour? The Left-Congress-Indian Secular Front (ISF) alliance and the BJP are relentless in attacking Ms. Banerjee. There are two mobilising issues at play — one is the TMC’s governance and the other is the Hindu-Muslim religious divide.

The Left-Congress campaign focuses on the TMC’s track record; while the BJP is going on a no-holds-barred, double-barrel mobilisation on anti-incumbency and along the religious divide. In fact, the Left-Congress-ISF alliance can be of help to the BJP in two ways — it provides an alternative to those who are tired of the TMC, but would not vote for the BJP; and the emergence of cleric Abbas Siddiqui as a prominent face of the alliance fulfils the fear of the Muslim theme that headlines the BJP campaign.

In certain circumstances, a new claimant can spook voters to an extent that they would rather stay with the detested incumbent.

Two recent examples, of the Congress in Gujarat in 2017, and the Rashtriya Janata Dal (RJD) in Bihar in 2020, are instructive. The BJP government in Gujarat after being in power for 20 years; and the Nitish Kumar government in Bihar after 15 years in power faced massive anti-incumbency among their respective core voters. The capacity of the challengers, the Congress in Gujarat and the RJD in Bihar, was limited, significantly due to the strong-arm measures of central agencies.

But the defining turning point in both elections was a reframing of the campaign by the incumbent, from anti-incumbency to the basest instincts and fear of a threshold population. In Bihar, the non-Yadav Other Backward Classes groups would rather stay with the National Democratic Alliance than risk the possibility of Yadav domination under a new RJD government. In Gujarat, where the basest appeal is religion and not caste —the spectre of a Muslim Chief Minister, the BJP’s rhetoric in the last days of the campaign, held back enough flock in the incumbent’s tent.

Ms. Banerjee’s strategy is premised on a belief that Bengalis think as Bengalis first; and they cannot be communally polarised to the extent of Gujarat or Uttar Pradesh. The TMC strategy relies on demography — a fourth of West Bengal’s voters are Muslims — and the assumption of a Bengali exceptionalism that is less permeable to intellectual ingress from the east. While demography is a strong barrier, Bengali exceptionalism could be an exaggeration. Bengal has been a recipient and originator of ideas in its interconnections with territories to the east. Some formative ideas of Hindu nationalism originated in Bengal in the works of Bankim Chandra Chatterjee and U.N. Mukherji. In today’s West Bengal, roughly 10% of the population is non-Bengali. The presumption that a latent, universal resentment against the ‘national’ is the leitmotif of Bengal politics is overwrought. In fact, Ms. Banerjee’s emphasis on Bengali identity could backfire on her.

Ms. Banerjee’s calculation is that Bengali nationalism could blunt the communal appeal of the BJP’s politics, but the way the debate is playing out could further religious polarisation. There is a cross-border Bengali identity that connects the populations of West Bengal and Bangladesh. The BJP too has a cross-border politics that connects Bangladesh and West Bengal as one theatre, but its basic premise is Hindu cultural nationalism. This idea was reinforced in Prime Minister Narendra Modi’s visit to Bangladesh recently. In the Hindutva imagination, West Bengal — and India — is a location of the Hindu refuge, while Bangladesh is a place of their persecution. The BJP has promised in West Bengal the implementation of the Citizenship (Amendment) Act that fast-tracks citizenship for non-Muslim immigrants from Bangladesh. The BJP campaign in West Bengal has portrayed Ms. Banerjee’s Bengali nationalism as illegitimate affinity towards Bangladesh. The BJP said West Bengal would become the next Kashmir under the TMC — suggesting that Bangladesh was also Pakistan until 1971. At this juncture, Bengali identity gets divided, not along the international border between India and Bangladesh and India, but as Hindus and Muslims who live on both sides. In other words, far from catalysing any Bengali renaissance against Hindutva, the invocation of Bengali nationalism may have invoked traumatic memories of communalism, separatism and violence that pulverised the region for decades, thanks to the BJP’s retelling.

While the incumbent’s strategy has evident weaknesses, the challenger’s capacity is not beyond doubt, despite help from central agencies. It has been pointed out that the BJP performs weaker in Assembly elections compared to Lok Sabha elections. The argument goes that if it goes lower than its 2019 performance, the BJP cannot win in West Bengal. But each election has unique factors at play, and history also tells us there is always a first time. The BJP has no baggage of history in West Bengal. However, the party’s organisational capacity is limited in West Bengal, and it has no ground game — so much so that several of its high-profile rallies came a cropper. Comparing one election to another is always fraught with problems, but the situation in West Bengal is broadly comparable to Assam in 2016 — a besieged incumbent, a triangular fight in some regions, and the BJP led by defectors from other parties.